There are so many incredible things you can do on a Onewheel™. You can cruise around town drinking a latte. Commute through the city to work. Head to and from class. Shred some trails in your local parks. The Onewheel™ represents opportunity and freedom.

But while cruising around on your Onewheel™ is an excellent way to spend your day, chances are that if a $1,000-$2,000 skateboard with a go-kart tire in the middle is what brings you joy then playing it safe isn’t high on your priority list. You want to push the limits! Carpe diem! Take no thought of the morrow, for you only live once so you better make it a good one.

You’re going to attempt some tricks. You know it. We know it. It’s only a matter of time. So take a look at some of our favorite Onewheel™ tricks, and see which ones you can’t wait to try.

This one is pretty basic, and you probably know what it is just from the name. You’re on your Onewheel™, there’s a curb in front of you, and you want to go over it. It’s as simple as that.

Ok, maybe not THAT simple. Here’s the deal. As you come into the curb you want to shift your weight to your back foot. This will raise the nose of your Onewheel™ enough to let it get over the curb. As your wheel gets close to the curb, you want to quickly shift all of your weight to your front foot. This slams the front of the board down at the same time the wheel hits the curb. The momentum will let the wheel ride up the curb, and you’ll be on your way!

The challenge here is largely timing. When you shift your weight to your back foot to start the trick, you’ll also be signaling to the Onewheel™ to slow down. But you also need speed to successfully Curb Hop, so you can’t start too early. The next move, shifting your weight to your front foot, is also all about timing. Do it too early, and you’ll stop the Onewheel™ too early. Do it too late, and the tire will hit the curb and bounce off rather than climb up and over. And regardless of whether you’re too early or too late, the result will be you flying forward while your Onewheel™ stops behind you. So try and practice with a curb that leads to some nice grass. And wear your helmet!

This is different than some other 180° tricks that have you jump and switch feet before landing back on the board. In this trick, you AND the board are spinning. It’s like a pirouette, but cooler because you’re on a Onewheel™.

It’s simple to describe, but slightly harder to master. To perfectly execute the 180° Flat Spin start moving in a direction, then quickly turn your shoulders and let your feet follow through the turn. If you’re leading with your left foot at the beginning of the trick, you’ll finish with your right foot in the lead after the 180° Flat Spin.

It looks cool because it is cool. And relaxing!

Whether you spent hours grinding away at your local skate park or grinding on everything possible in Tony Hawk’s Pro Skater 2, chances are good that if you are into a board sport the appeal of sliding along some form of ledge is appealing to you. Here’s how to do it with the Onewheel™.

First, you want to be riding close to the curb but still parallel to it. Then, swing the front of your Onewheel™ over the curb and shift your weight down onto your front foot. This will lift the wheel off the ground, and you’ll be able to grind for a few moments. To exit the slide, put your weight on your back foot and swing your front foot back off the curb. You can keep your Onewheel™ moving in the same direction forward or you can come out of the trick going fakie in reverse.

Now that we’ve gone through some of the easier tricks, let’s focus on some harder ones. 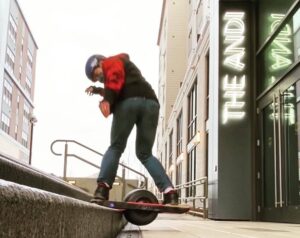 This is a slightly more advanced version of the Curb Hop. With the Curb Hop, you are using momentum to get the Onewheel™ to climb the curb. But with the bonk, you’re goal is to hit an object and bounce up and over it.

The physics are pretty simple. You want to have a good bit of speed built up. Make sure you hit your object, maybe a small curb, speed bump, or even a root sticking out of the ground, straight on. If you come in at an angle there’s a good chance the board will twist on you. Hit the object straight on. As you hit the object, push down on your front foot to get the front of the Onewheel™ to push down on the backside of the object. At the same time, you want to bend and lift your knees. This will allow the wheel to bounce up. The more you bend your knees, and the higher your speed, the bigger the bounce.

This can be pretty difficult and can really launch you in the air, so stick with objects that are only a few inches off the ground. And anything with a slope, like a speed bump, is going to be easier to learn on.

Dropping off of curbs and ledges can be a ton of fun. There’s not much to this trick. Pick a ledge, and go over it. Start with the small stuff, like a small curb. Increase the size of the drop as you get more comfortable.

Some things to keep in mind. You want to be leaning back slightly when you start the drop. Don’t keep all of your weight on the front of the board. You might go flying over the front if you do. And make sure to bend your knees! If you would jump off a ledge you would bend your knees to help absorb the impact. Do the same thing on your Onewheel™!

Once you have mastered the drop then you’ll be one step closer to whatever terrain you come across!

FlightFins isn’t the name of a trick, but they are an accessory that opens up an entirely new world of possibilities when it comes to tricks you can do on your Onewheel™. These FlightFins attach to your Onewheel™ and hook up and over your feet. This means that you can now perform jumps with the Onewheel™! Get bigger air when going over ramps or performing a bonk. Jump and twist and do anything you can imagine, now with a way to keep your feet on the board. Use these to come up with some awesome new tricks. Just make sure to take a video of your new tricks and send them to us!

So there you have it! Just a small sampling of some of the incredible tricks you can do on a Onewheel™. Remember, part of doing a trick is looking cool. And the easiest way to look cool while doing tricks on your Onewheel™, or just doing regular everyday things, is to be wearing some Float Gang gear!

This entry was posted in Onewheel Life, Tips and Tricks

Top Places to Float in Orlando

Top Places to Float in Orlando

How to Rent a Onewheel in Orlando

Is The Onewheel GT Worth It?