No, that’s not an invitation to go hang out in a lazy river. It’s not a plea to take part in your local parade. And it’s probably not a euphemism to imbibe some form of herbal substance that may or may not be legal depending on what state you are in.

No, it’s something far better than that.

Float verb // the act of riding a Onewheel, the sensation of which has been described as very similar to floating on a cloud of awesomeness. / Let’s get our Onewheel and float down to the park.

If you’re not familiar with Onewheel™, think of an electric skateboard. No, not a Onewheel hoverboard. Here, I’ll break down the differences for you.

What the heck is a Onewheel™?

A Onewheel skateboard is technically a self-balancing single-wheel personal electric vehicle. Electric skateboard sounds better though, and is easier to visualize. The Onewheel has a computer on board that helps keep the board balanced and easy to ride.

Riders simply stand on it, lean forward to speed up, lean back to slow down, and shift their weight from their toes to their heels to steer. It is easy to learn and fun to master.

According to a video on the Onewheel YouTube channel, it was designed to mimic the smooth experience of snowboarding. And that’s precisely what it does. The giant wheel is perfect for all types of terrain, from smooth sidewalks to poorly maintained city streets. From biking trails in the forest to sandy beaches.

From your backyard to…, you get the idea.

And with the Onewheel being water resistant, you can feel confident using it in most situations.

What the heck is a hoverboard?

Whenever someone hears the term hoverboard, they automatically think of the awesome flying skateboard used by Marty McFly in the Back to the Future movies. Modern hoverboards bear no resemblance to that though. They don’t hover at all!

So before we go any further, let’s just acknowledge the marketing geniuses who decided to name their completely unrelated product after a futuristic technology that was widely known and craved for by people worldwide. It is just an exquisite example of superciliousness and hubris. So shocking and outrageous that it is a thing of beauty!

Anyway, back to the hoverboards.

Modern-day hoverboards are nothing like the hoverboard from Back to the Future. Technically, real hoverboards are considered to be self-balancing electric scooters. Riders sit on top of foot pedals that connect two wheels. And just like the Onewheel, riders shift their weight and use their feet to control their speed and direction.

To The History Books!

Way back in the ancient times of… checks notes… 2013, the only popular self-balancing personal transporter up to that point had been the Segway. The American public was fascinated by this device until it was revealed that the Segway was the vehicle of choice for Paul Blart: Mall Cop. Paul Blart did to Segways what The Undertaker did to his opponents with his Tombstone piledriver.

Another victim shuffled off this mortal coil to become a punchline of history.

The self-balancing personal electric vehicle industry would be dormant until February 2013. Shane Chen filed a patent for a hoverboard device and launched a Kickstarter campaign later that year. The product was soon endorsed by several different influencers and action sports athletes, which helped spread its appeal throughout the Western world.

At the same time, Kyle Doerksen was working on the prototype for what would become the Onewheel. After 8 years of development, he launched the v1 Onewheel with a Kickstarter campaign in January of 2014. The Kickstarter campaign was a massive success, raising over $630,000 in just a few short weeks.

The most significant difference between the Onewheel and the hoverboard is the wheels. Onewheel has, believe it or not, a single wheel that riders straddle. The tire is similar to those found on go-karts, allowing the Onewheel to ride smoothly on several different types of terrain.

Hoverboards have two wheels that the rider stands between. There are several different types of models of hoverboards, and some of the most significant differences between the hoverboard models have to do with the tire sizes. 6.5-inch wheels are perfect for kids and teenagers, while most adults will lean into the 8-inch wheels. 10-inch wheels are also available, which are more comfortable for the rider but much heavier.

Most hoverboard tires are designed to be used indoors or on paved sidewalks. If you want to take yours on more challenging terrain, you need to look into specialty off-road hoverboards.

Another significant difference is how you stand on each device. On a hoverboard, your feet are shoulder-width apart, parallel to the wheels, and your toes point in the direction you are moving. Picture yourself standing on the people-mover at the airport. That’s you on the hoverboard.

With the Onewheel, your feet are perpendicular to the wheel. Picture Tony Hawk riding a skateboard, Shaun White on his snowboard, Danny LaRusso facing off against the punks from Cobra Kai… THAT’S what you look like while floating on a Onewheel. 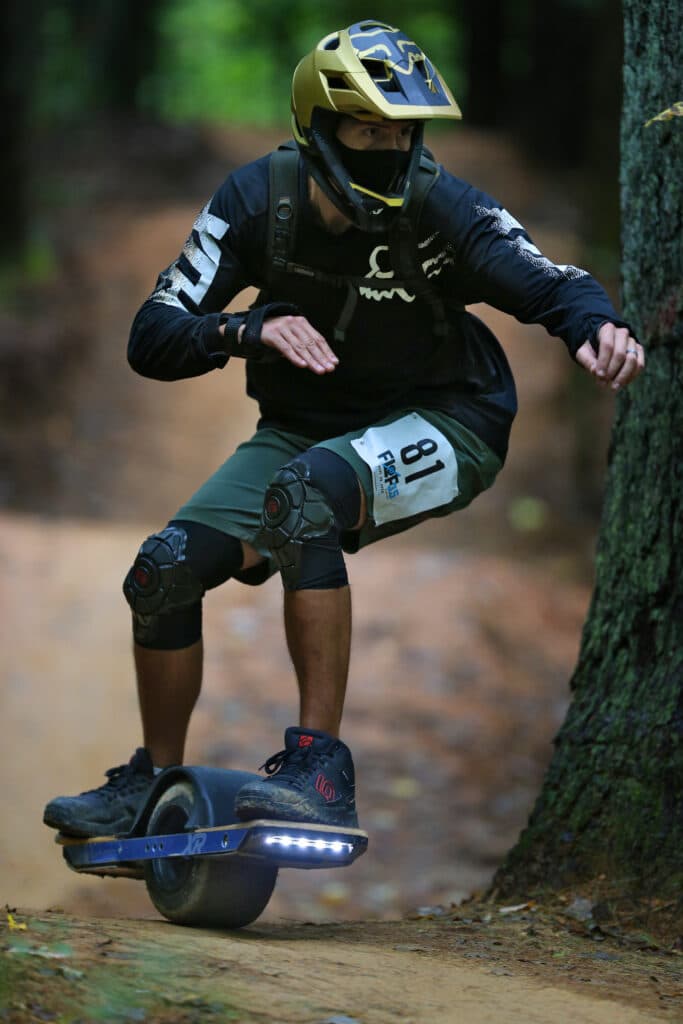 Another important distinction between Onewheel and hoverboards are their batteries and how far they can go on a single charge.

Onewheels have advanced batteries designed to let you get out and explore the city, or spend an entire afternoon on the trails. The Onewheel+XR has a range of up to 18 miles per charge, and the smaller Onewheel Pint gets about 8 miles. Extra batteries can also be purchased that will help you get even more miles per charge.

How far you can go on a single charge with a hoverboard depends entirely on what type of hoverboard you have. Most models won’t come anywhere close to the 18 miles you get with the Onewheel+XR. In fact, you’ll be lucky to get 6.5 miles with an average hoverboard model.

The Onewheel and hoverboards wouldn’t be the same if you couldn’t customize it and have it covered in your personality. Several different companies manufacture hoverboard devices, and they all look slightly different. And if you want to buy a custom skin to change the appearance of your hoverboard, you have to make sure it fits your particular model.

With the Onewheel, there are currently a total of 2 models: the Onewheel+XR and the Onewheel Pint. There was also the V1 Onewheel and Onewheel Plus, which have both been discontinued. And while you might think that having a limited number of models means each product will look the same, you would be wrong.

Entire companies have popped up offering customization options for all Onewheel models. Fenders in all different colors. Foot Pads in various shapes. Handles to carry your board. Float Plates, Rail Guards, Bumpers…

The list of items you can purchase goes on and on.

We can’t get enough of the Onewheel stoke, and we’re part of a big community that we know feels the same way. Here at Float Gang, we are constantly developing new styles and designs because we are passionate about making our Onewheel part of our lifestyle.

Looking for ways to showcase your love for the Onewheel? Check out our shop, with everything from hats to hoodies to t-shirts and even face masks.

This entry was posted in Onewheel Life

Can I travel with my Onewheel on an Airplane?

How to Rent a Onewheel in Orlando

Is The Onewheel GT Worth It?

Stylish, unique and modern designs to showcase your passion for Onewheeling. Quality made shirts, sweaters, hoodies and hats delivered to your door, just in time for your next ride.

🫵 This is the sign you’ve been waiting for. G

We be wildin’ 😄🍁💨 thanks for the shout

Dude absolutely shreds on a Onewheel 🤘Taking on

When the slide is as smooth as butter #onewheeltri

It’s how he turns around for me 😂😂 #onewhe

What would you choose?? 😂😂 @orlandoonewheel

When you’re running late but end up face plantin

Happy New Year everyone! And a huge shout out to t

This Jurassic Park build is dino-mite 🤩 📸:

This Float Gang waffle beanie is guaranteed to kee

We all know the feeling 😄 #onewheel Meme: @flo

Only a couple days left to shop and receive your i